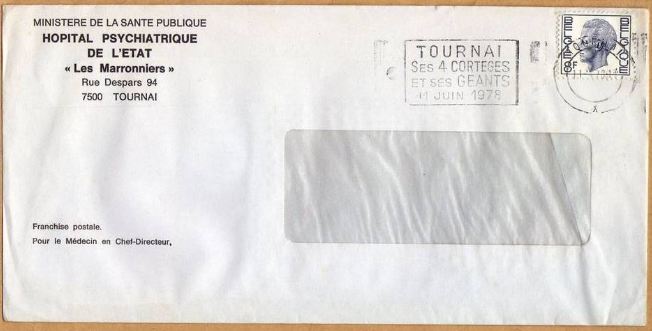 The circumstances of Campana’s life, his Bohemian attitudes, his travels to foreign countries, the loss of themanuscript of Canti Orfici, and the tragedy of his final years have tended to focus critical attention on the poet as poète maudit. The attempts made by his biographers to establish a firm and detailed chronology of his life have been largely frustrated by the scarcity of original documentation. Much information is of course contained in Dr. Pariani's transcript of his conversations with the poet in Castel Pulci, and additional information has come from Enrico Falqui, whose acquaintance with friends and relatives of the poet provided him with a ready source of 'second-hand’ material.1 Original documentation, however, has not been forth-coming, and the silence has been particularly regrettable in the period between the end of Campana's university years in Bologna (1907) and his registration at the University of Genova in 1912.

The hitherto accepted account of the years in question, 1907-1912, has been as follows. After his fourth year at university (Bologna) in 1907, Campana made a brief trip to Paris but had returned to Marradi by the end of the same year. In 1908, he was accompanied by his uncle Torquato to Genova. There he boarded a ship for South America (Buenos Aires) where he spent the next eight months. By the end of 1908 he had arrived back in Europe, disembarking in Antwerp. There is no evidence of his whereabouts during the following months but it has been generally agreed that the six months which Campana said he had spent in a Belgian prison and mental hospital must lie in this period.2

Biographers generally agree that Campana spent ‘diciotto giorni... in una clinica fiorentina’ shortly after his return to Italy in April 1909 (Falqui. p.34), although no further information regarding that internment has come to light. Covering the following three and a half years, however, we have had only the vaguest information.3 I have recently had the good fortune to discover four unpublished documents — transcribed below — in the Town Hall of Marradi, and these show interesting new light on this crucial period. 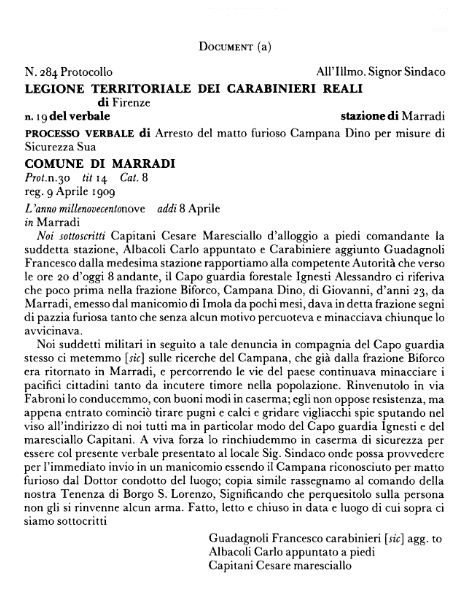 The first of them (a) is a police report dated 8 April 1909 and issued in Marradi. It gives a first-hand account of events leading up to Campana's arrest on that day, and it substantiates stories of his violence and aggression, a trait which was to become increasingly prominent. Even the terms of his abuse ('spie, vigliacchi') reflect those delusions which recurred with increasing frequency in later life.4 Such details, together with the references to Campana's behaviour ('matto furioso', 'segni di pazzia') confirm the evidence we already have that, even at this early stage,

Campana was no 'eccentric Bohemian' — a view some critics have preferred to adopt5 — but a sick man. This is reinforced by the second of these documents. 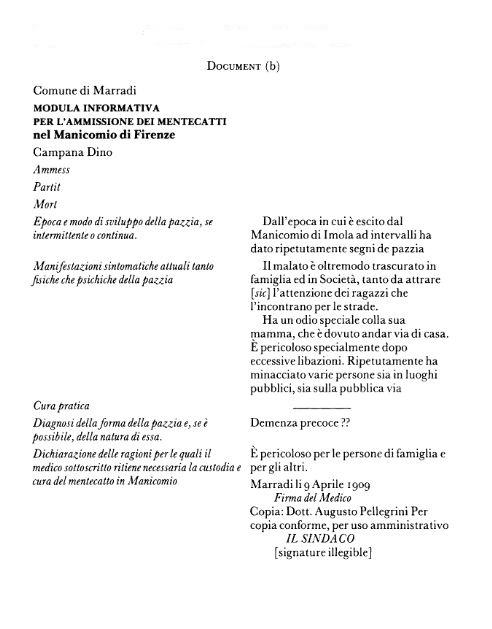 This is the Medical Admissions Report (b) (‘per l'Ammissione dei Mentecatti’) to the hospital of San Salvi in Florence. It is dated 9 April 1909 and was declared 'irretrievable’ by Dr.Pariani (p.23). It is particularly important since other such reports — those from Imola, from Tournai and even from Castel Pulci — have all been lost or destroyed.6 Apart from its historical significance it provides new insights into his family background and illness: neglect at home, the possibility of an inherited mental illness, the detrimental effect of alcohol. It also confirms rumours concerning Campana's relationship with his mother.7 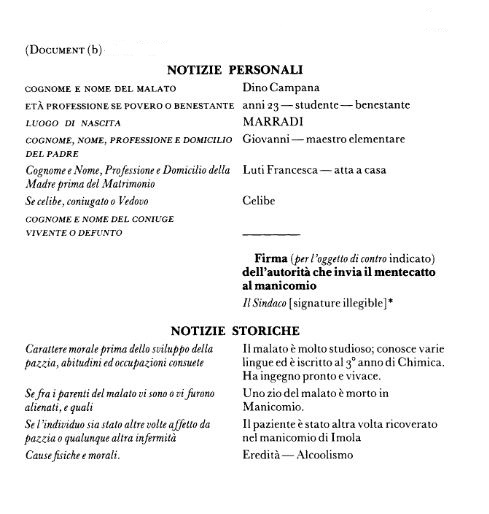 The third and fourth of these documents are important because they challenge the by now accepted chronology of Campana's travels, both of them are official letters which discuss Campana's repatriation from Belgium, hitherto thought to precede the events documented above.

The first letter (c) is dated 25 March 1910. It was sent by the Prefect of Florence to the Mayor of Marradi and evidently follows a request from Belgium for Campana's repatriation. It emerges that the Belgian Medical Authorities do not consider Campana capable of taking responsibility for himself. They apparently refer to him as ‘demented’ and are unwilling to send him home without assurance of his receiving continued care. 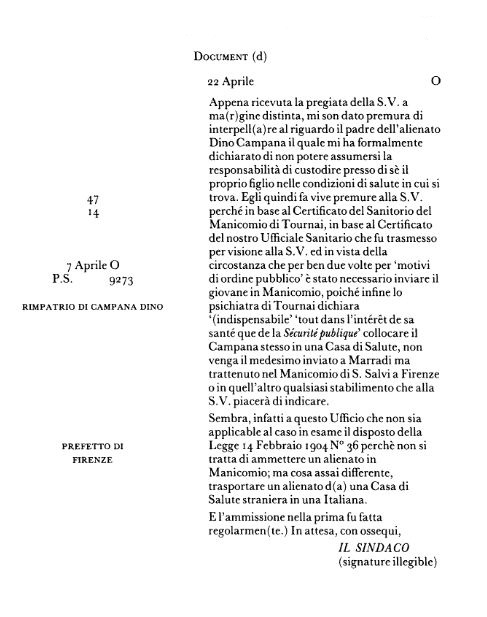 The second letter (d) is dated 22 April (the year is partially obscured) and was sent by the Mayor of Marradi to the Prefect of Florence. It appears to be a reply to the above and to a further enquiry of 7 April. It refers to the unwillingness of Campana's father to take his son back home. This reluctance may appear strange when it is remembered that just four years earlier he had signed an ‘Atto di Responsabilità’ to secure his son's early release from Imola, but it is perhaps less surprising in the light of intervening events outlined above, and of the Belgian psychiatrist’s report of which we see a fragment in this letter.

This new evidence that Campana was interned just one year later than previously thought invites a revision of the received chronology. Reconstruction from what Campana had told Dr. Pariani: 'Sbarcai in Anversa, andai a Parigi e da Parigi venni al mio paese' (p. 42) suggests that he would have returned to Europe from South America probably towards the end of 1908, stopping some time in Paris on his way back to Italy, and arriving in Marradi some time before 8 April 1909. After his arrest and imprisonment he would have left Marradi again for Belgium a few months later, and been arrested in Brussels. Then, early in 1910, he would have been transferred to the mental hospital at Tournai. It was there that the above correspondence originated.

This interpretation, however, leaves several unanswered questions. Campana also says: 'Nel viaggio di ritorno in Italia, passando nel Belgio, mi arrestarono e mi tennero nella cella, per due mesi, di una prigione: Saint Gilles... . Poi fui rinchiuso a Tournay’ (p. 59). It is certainly surprising that neither Campana’s brother nor he himself ever mentions a second visit to Belgium. Again, it appears strange that neither the Police Report nor the Medical Admissions Report should refer to Campana's South American voyage had it taken place prior to his arrest and internment (April 1909). Finally, although Campana's assessment of time is not always accurate,8 his memories of hospitalization and imprisonment clearly follow his return from South America. If his recollections are accurate, we must conclude that Campana's trip to South America took place after his release from San Salvi, in April 1909, that is, one year later than previously accepted, and that the chronology of events was as follows: 8 April 1909 arrest in Marradi; 9-26 April, internment in the hospital of San Salvi, Florence. Later that spring, Campana left for Genova, accompanied by his uncle Torquato and boarded a ship for Buenos Aires where he would spend approximately eight months. Back in Europe (Antwerp) by January 1910, he was arrested and spent two months in prison (St.Gilles) before being transferred to the mental hospital Les Marronniers in Tournai. Belgian authorities then began enquiries concerning Campana's repatriation. This second interpretation seems to me the more probable.

By providing further information on this period of Campana's life, these documents may help to dispel something of the 'legend’ which has grown up around Campana, and contribute to a more informed approach to the man and his work.

8 He recalls spending four months in Imola instead of eight weeks and he recalls five years in Argentina (Pariani, pp. 46, 42).